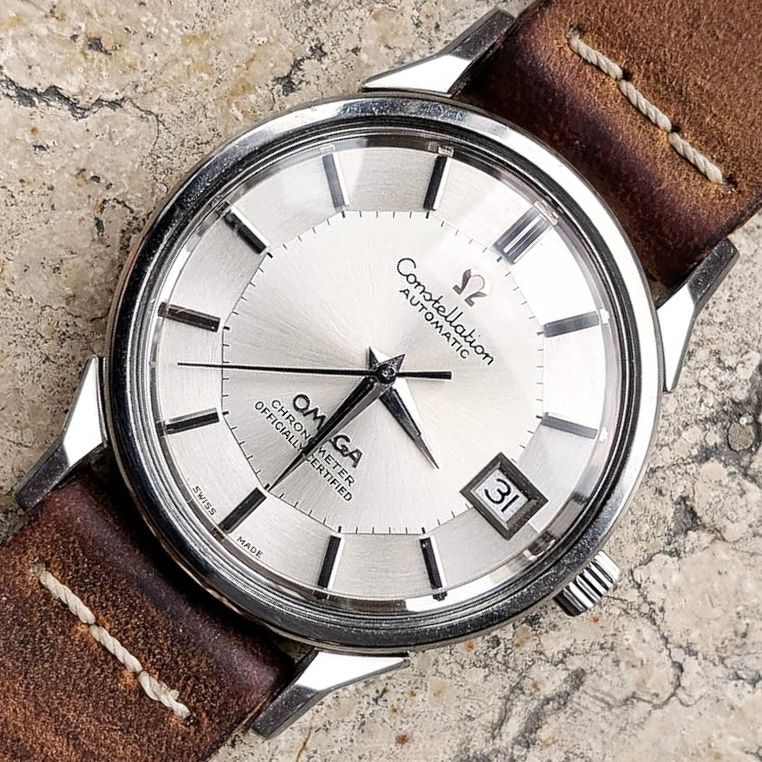 The mid 1970s were a time when Omega was experimenting a lot.  Even the flagship Constellation line was being pulled in many different directions by the company as it tried to regain its footing during the "Quartz Crisis".  Constellations with quartz, tuning fork, and mechanical movements and wildly varying shapes and styles were being brought to market in a hope to regain some of the traction Omega enjoyed during the golden era of the 50s and 60s.

While the rest of the model line tried to carve a path in new directions, Omega produced two models exclusively for the Japanese market, that took a nostalgic step back into the past.  These two models, the 168.0065 and 168.865 carried the vintage Omega logo on their dials in an era when even the Moonwatch had been updated with the new "modern logo", and resurrected one of Omega's most loved dress watch designs.

How Lucky Were Japanese Collectors?

It isn't just that Japan received quite a number of exclusive releases from Omega over the years.  It's that the quality, desirability and attractiveness of those exclusives were so high.  From the Mitsukoshi Speedmaster Pro, to the gold Speedmaster perpetual calendar, to the beautiful Jumbo Geneve model I've written about previously, Japanese collectors got lucky quite a lot.

As with many other Japan market specials, the 168.0065/168.865 Constellations did not tow the company line in terms of design language and was possibly one of the earliest occurances of Omega releasing a "tribute" to a previously produced watch.

While on watch forum and sales listings there are references to these watches being limited editions, its worth noting that they are certainly not numbered and that the "2000 units" proposed by many people is not able to be substantiated.  Given the number of years they were produced and how many of them are floating around inside Japan in particular, its safe to say there was no shortage of the 168.0065 pie-pan at the very least.

That's great news too, because these are brilliant watches, and great value if you're willing to put some work in and be patient.

The more common of these two Constellation is the one that attracts collectors the world over, a stainless steel case with a pie-pan dial.  These watches and their dials are very easy to verify the originality of visually because unlike earlier models, every single one of these is exactly the same.  There is no gold or gold plated version, all 168.0065 models are made in steel only.

The only dial available is a traditional shaped pie-pan in a silver tone with a starburst effect to the center section and concentric brushing on the outer facets.  It has stick shaped hour markers, doubled at 12 o'clock, and omitted at 3 o'clock to allow for the date window, each with an onyx insert for contrast.  All models feature the same dauphine hands with onynx inserts.  There is no luminous material on either dial or hands, and the hands should only reach the edge of the pie-pan center dish, not all the way to the outer edge.

There are some very immediate differences between these dials and the 14900 versions.  Firstly the Omega logo is still applied, but is separated, with the symbol at the top in the usual position, but the word OMEGA moved to the lower half of the dial.  The text at top and bottom has also switched places, with Constellation at the top, Automatic immediately beneath it, and Chronometer Officially Certified at the bottom.  The date window of the 168.0065 is also sharper than the vintage models with square edges rather than bevels.

The bottom of the dial is marked only with Swiss Made.

The flat dial is certainly less common than its pie-pan sibling, and is frequently mis-labelled due to its double reference stamped inside the caseback.  It shares everything with the 168.0065 with two key exceptions.

The first is the dial, it is completely flat unlike the pie-pan and has an almost matte silver tone with no brushing.  It has the same layout of text on the dial as the 168.0065, however it has the word OMEGA printed rather than applied to the dial.  While it also has applied dial furniture with onyx inserts double at 12 and omitted at 3, the actual markers are very slightly thinner than on its sibling, and the date window has a slightly softer edge to the corners.

Instead of the dauphine hands, thin, black painted stick hands are used with a silver second hand.  Both hands and dial remain non-luminous, as with the 168.0065.

The second major difference is the case material.  While the 168.0065 is only avaialable in stainless steel,  the 168.865 is primarily found in steel but can also be found, very rarely, in a gold plated case with matching dial.  These gold examples are sufficiently difficult enough to even find photographs of, to safely call rare.  What makes it even more difficult to find an example is that unlike the 1960s piepans which came in fairly thick and sturdy gold-cap, this gold plate is a lot thinner, and coupled with the very angular case shape with many sharp corners and vertices, wear-through is very common.  In this sense, it probably is a good thing that few gold-plated models seem to have been made, and if you find a nice example, definitely treat it with great care.

Even though these watches have different references, case of these watches is actually identical.  All cases for these two Constellations carry the stamp 168.0065, regardless of which type they are, with the non-piepan models featuring a second, additional case reference below the original with 168.865.

The cases are extremly similar to the orignal reference 14900 Constellation at 34.5mm with 18mm lugs. Omega even faithfully reproduced the complex beveled edges of the dogleg lugs to a high degree of accuracy.

Due to the Calibre 1011 movement being 0.75mm thinner than the Calibre 551 of its predecessor, the watch case is able to be slightly thinner. This difference is evident in the caseback, which is flat on the Calibre 1011 models instead of being somewhat curved outward in the earlier models.

Like their predecessors, these cases can easily lose the sharpness of their edges due to ham-fisted polishing, leaving the lugs looking round and unappealing.  The bezel, being a separte piece can also potentially go missing, or crack from improper removal or installation.

It should be noted that another key difference between these references and the 14900 is that the iconic dodecagonal crown is replaced by a simpler knurled one.  This is a much more practical option than the 60s design, and while some owners have fitted vintage crowns to their own, the knurled one would definitely be preferable to most people's fingers.

At 18mm lug width, these Constellations can take any of the vintage bracelet options that fit the original 14900, including the very popular 7-row beads of rice bracelet, reference 1037.  Aside from the 1037, these watches are also often found with a single link 2054 bracelet that looks superficially similar to the beads of rice from a distance.  There are also beads of rice variants carrying no reference sometimes found on these which are similar but subtly different from the 1037.

Both of these Constellation references are powered by the Calibre 1011 automatic chronometer movement.  This movement features a 28,800 vph beat rate, hacking, and quickset date all in a package only 4.25mm thick.

As mentioned in previous articles, the general fear and misunderstanding about "The Calibre 1000 series" haunts these watches and turns people off them when the Calibre 1011 and its family is fundementally different from the early Calibre 1000, 1001 & 1002.  These movements are distinctly different, the result of a major redesign of the early 1000 series, and contain mostly new parts to correct the problems of its predecessor.

If serviced by a qualified watchmaker with an Omega parts account, you can expect very good accuracy, reliability and durability long into the future from your Calibre 1011 Constellation.

These Constellations, along with many Japanese market specials were not limited editions in any definitive way, but by virtue of the their limited distribution in one country there aren't a huge number of them around in the western collector sphere.  When they do appear for sale in clean condition, they often are listed for significant sums of money, with $1,500-$2,500 not being uncommon for a nice example.

Although these references are extremely attractive visually, on par with the highly sought after reference 14900 Constellations of the 60s, and have very good movements within them they still are not well known.  The combination of being unavailable in most countries, poorly understood, and the completely misplaced fear people have of the Calibre 1011 movement see them attracting fewer bids on eBay.  Sometimes this indifference and apathy towards them can even see prices go well under $1,000 even for nice examples.

There is a definite price difference between the 168.0065 pie-pan dials and the 168.865, with the piepans carrying a significant premium over flat dials.  This makes the .865 variant a particularly interesting pickup as they are also far less common and rather unique.

While there are always several for sale on Chrono24, eBay and forums, if you are willing to work for it, and know some Japanese, or have a Japanese friend, there are great deals to be had on these in their natural habitat.  Yahoo Auctions Japan, local dealers there and other Japanese marketplaces are among the best bets as far as snagging a nice, clean example at a good price.  It does help tremendously though having a local contact to facilitate the puchase and export.

Hallmarks of a Japanese Special It's interesting to see just how much all of the
This unique and unusual jumbo sized Omega Geneve comes in two near identical variants.  The
In the 1960s, Omega produced a wide gamut of Geneve models spanning from dress watches,